Ithaqua Labs, named ominously after a Great Old One from the lovecraftian Cthulhu mythos, is one of the more unique studios on the EVN scene, not following closely the tropes and aesthetic of the Japanese VNs. While their fantasy and horror games did not really break into the mainstream of the visual novel market, they definitely stand out among the generic romance and ecchi VNs most often found on Steam. On June 14 this year, the two-man team added another interesting title to their catalogue – Perceptions of the Dead 2, sequel to a collection of 3 short horror stories which was one of the Ithaqua’s earliest project, dating back to 2015. Before I go into details of the new release, it’d be a good idea to take a closer look at its prequel (which, by all standards could be considered as a short prologue to the “proper” story told in PotD 2). 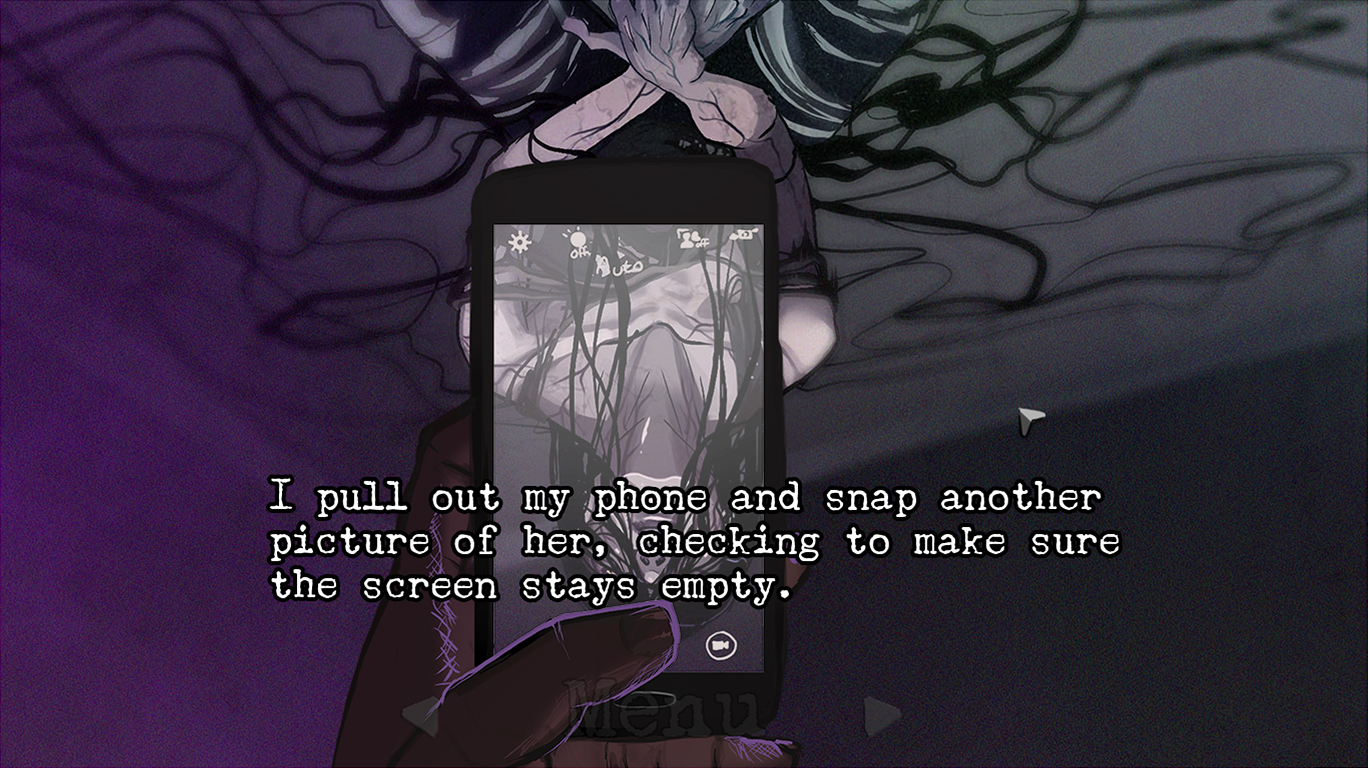 The first Perception of the Dead is simply the prologue for the „real” story, but does a good job of introducing the main characters and establishing the setting
Perceptions of the Dead, in the "remastered" version released in late October 2017, contains three horror stories set in the modern-day US (the plots of all of them are brought together in the sequel). While they have a slight Lovecraftian vibe to them, they are nowhere near as grim and suffocating as their inspiration – they’re mostly lighthearted, playing with the tropes of the genre in interesting and amusing ways, but not trying to be genuinely scary. The PotD episodes introduce two protagonists of the franchise – a streamer named Jill, who gets involved with paranormal phenomena by accident while making a Halloween trip to a haunted hospital and Tyrone, a powerful medium who works as a paranormal investigator (along with a substantial cast of supporting characters). While the first of the stories, The Phantom Icecream Truck, is rather clunky and underwhelming, it was also the earliest project by the studio, evidently still looking for their own style in both visual and storytelling. The other two, Jill Count and Perceptions of the Dead, are much more interesting though and tell stories that lead directly into the second game.
All episodes of PotD share some characteristics that are also very much present in the sequel – distinct, colourful artstyle and good-quality, full voice acting. Both do a lot to make the characters feel alive and likeable – even someone like Jill, who has a slight “bratty social media starlet” vibe to her and could easily be off-putting, feels both believable and fun to follow thanks to her voice actresses’ work and good visual design. The art is sometimes simplified (or even slightly distorted, when it goes to anatomy and various environmental details) but is vibrant and gives the characters a lot of personality in that slightly exaggerated, cartoonish way. For the most part, I absolutely adored the aesthetic of the game and the atmosphere it created, especially after prolonged exposure to cheap ecchi EVNs and their depressingly generic anime art. 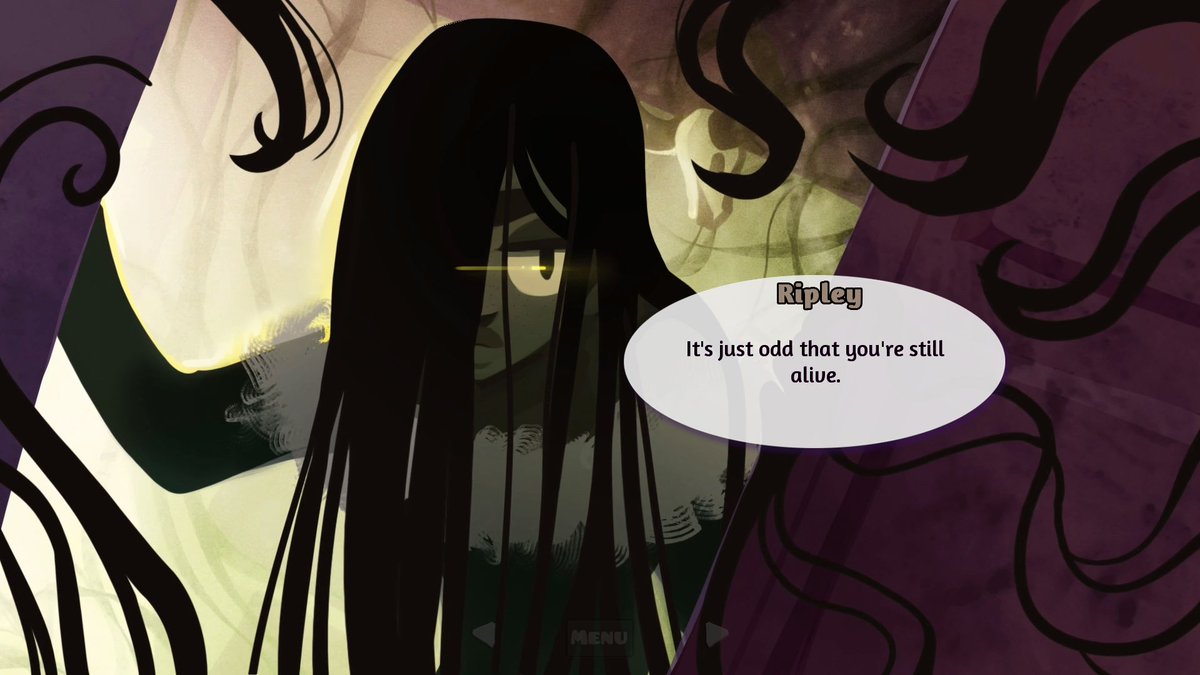 The game’s artstyle and character designs are its most distinctive features, building a rather unique atmosphere
The story itself might be, however, slightly more problematic, at least from a certain perspective. While Perceptions of the Dead established the setting and its basic rules, with ghosts, mediums and supernatural threats that will become center of attention in the sequel, even when looking at both games combined, they’re a rather short experience (up to 5 hours of reading) that is only starting to gain momentum and unravel the bigger intrigue signalized in the plot. While the sequel is meant to contain two stories, only the first one of which is already out, it’s hard to believe that the upcoming one would be able, on its own, to give us the backstories of the characters and push the story forward as much as we would want it to – and there are some really interesting pieces of lore that just scream to be explored more, while we also still know very little about crucial characters, such as Ripley, an ancient ghost that got interested in Tyrone’s power as a medium and Marcus, Tyrone’s longtime friend who also possesses significant abilities of unclear nature. PotD 2’s story, so far, starting with Tyrone missing and Jill, looking for help with her own hunting problem, teaming with Ripley and Marcus to look for him, mostly created more questions and expanded the intrigue without resolving anything. At least I can’t deny it left me wanting much more – hopefully, Ithaqua has plans to keep the franchise alive beyond another 2-3 hours long story bit, it would be a real shame for it to end without reaching its full potential. The consistently strong voice acting adds even more life and personality to the whole cast, including most of the supporting characters
The other complaint I have to share is how linear the whole experience is – both in the case of PotD and PotD 2, the choices are both few and mostly meaningless (apart from literally one optional scene and a single, abrupt dead end). While the gimmick of Jill’s audience giving her direction by comments or voting while she’s streaming was fun and immersive, it doesn’t change the fact that in reality the game gives no agency to the player. The story is also full of popcultural references that give the characters even more genuine feel (especially between Jill and Marcus who are both popcultural geeks), but I can imagine them growing old pretty fast or falling flat if you don’t know the referenced material. Music is rather minimalistic, doing the bare minimum of ambience-building necessary in this kind of story. In the end, though, I see Perception of the Dead 2 as a very positive experience – not really as a horror, but as a casual adventure story with a fun cast and unusual premise. Definitely worth checking out, especially for the modest asking price of less than 10 dollars.

Liked what you read?

Plk_Lesiak
I'm an otaku whose passion for anime artwork and narratively-driven games led him to embracing visual novels over any other kind of media. For a few years now I'm exploring the genre, sharing my thoughts and trying to promote exceptional titles within the niche – EVNs in particular, as the negative stereotypes and prejudices within the JP-oriented VN community often prevent them from being fully appreciated. Outside of my otaku hobbies, I've been involved in academic research on popculture and fan communities, associating my MoA and PhD (currently on hold) projects in sociology with those topics. My passion for VNs fueled both my blog and many of my university projects in the past, and I hope I'll be able to continue using it for both in the foreseeable future.